» End of the decade: Marc, Shane, Ward, Bill and guest bassist Johnny Hedges of Jack of Diamonds play the End of the Decade Party at the historic State Theater, Newark, Del.

» WTV videos: The five-piece band’s first performance is not for a live audience but for video cameras.

With the University of Delaware’s Winterim TV, Joe Dombroski directs “I Don’t Need a Reason” and “I Want You Right Now.” MTV would not be launched until August 1981. 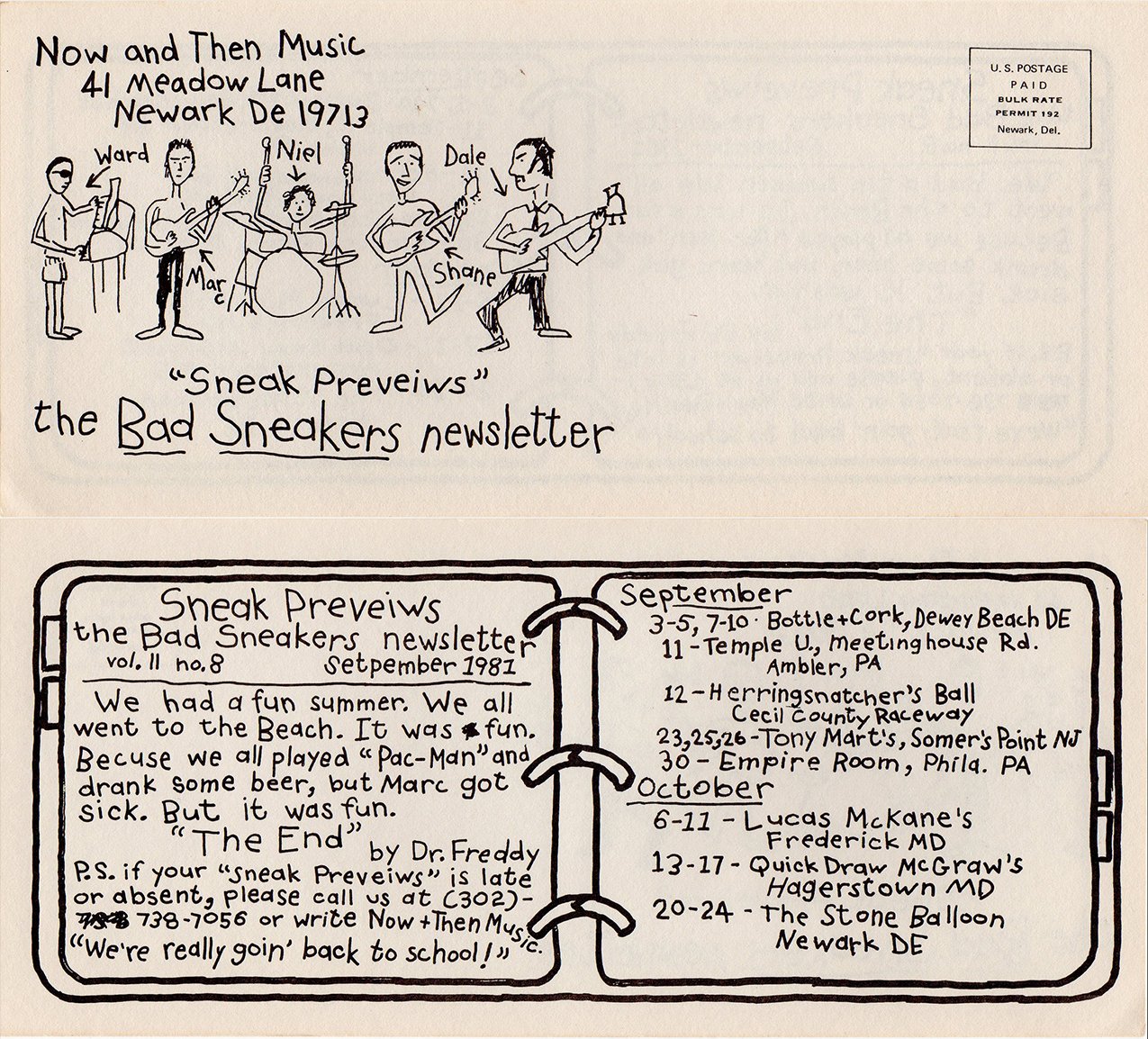 » Rock the vote: In conjunction with the League of Women Voters, Bad Sneakers holds a midday concert in Wilmington’s Rodney Square encouraging citizens to register and vote.

This begins a tradition of public service in which the band gave back to its community. OK, free publicity and significant tax benefits don’t hurt either. OK, the whole thing started because the band thought it was the League of Women Boaters, with babes in cute sailing outfits.

» The Tally-Ho disco palace north of Wilmington, Del., morphs into one of the state’s leading rock venues. Over five years, Bad Sneakers will play scores of shows and debut two albums at the club – “alive and rockin’ seven nights a week,” a radio promo trumpets.

» The Bad Sneakers newsletter goes for baroque. No computer graphics here, just an IBM Selectric typewriter, lots of Letraset and some clip art. 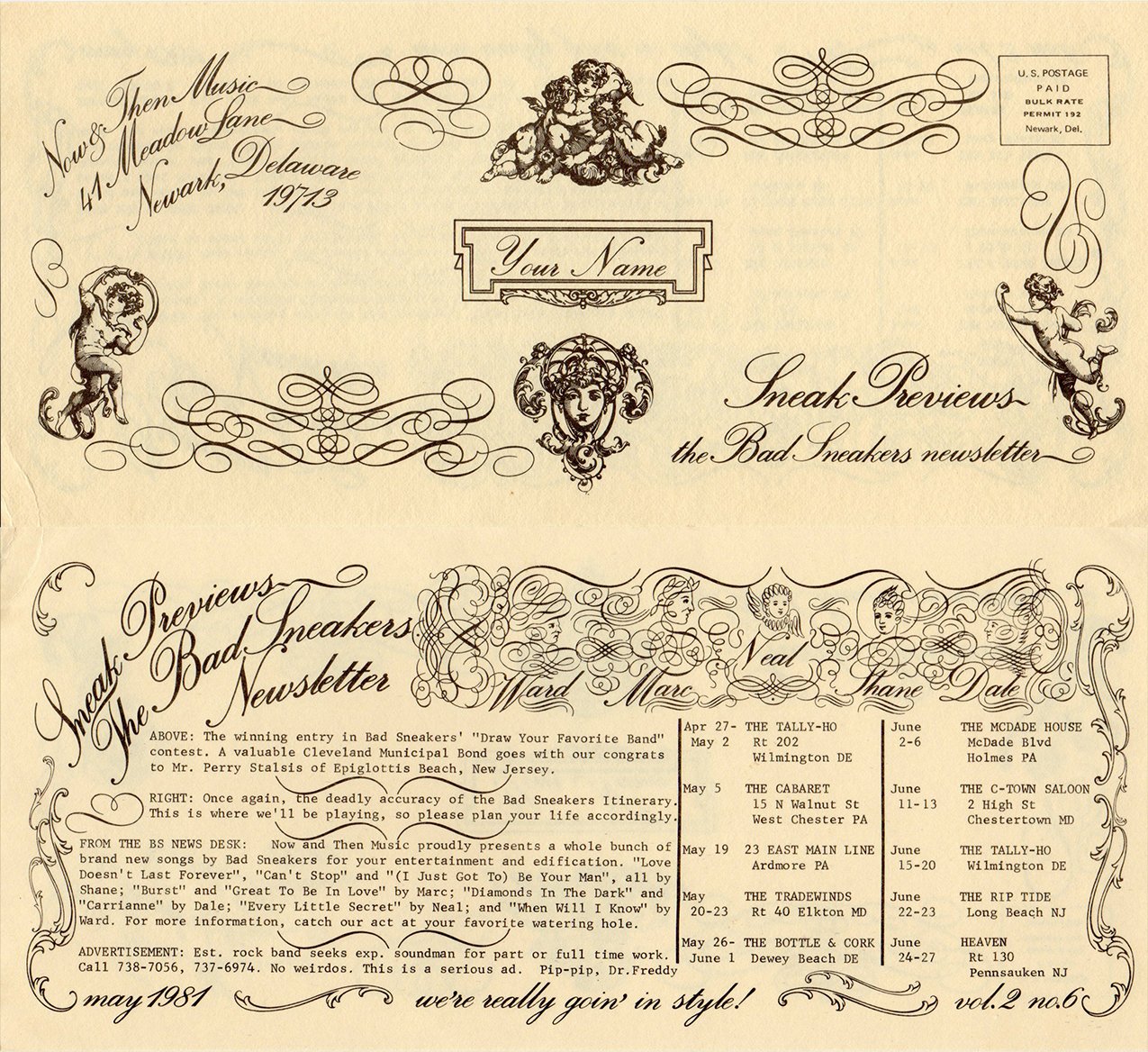 » The Bad Sneakers newsletter this month looks like a big dollar bill, but instead of George Washington there’s a picture of Shane! Har! 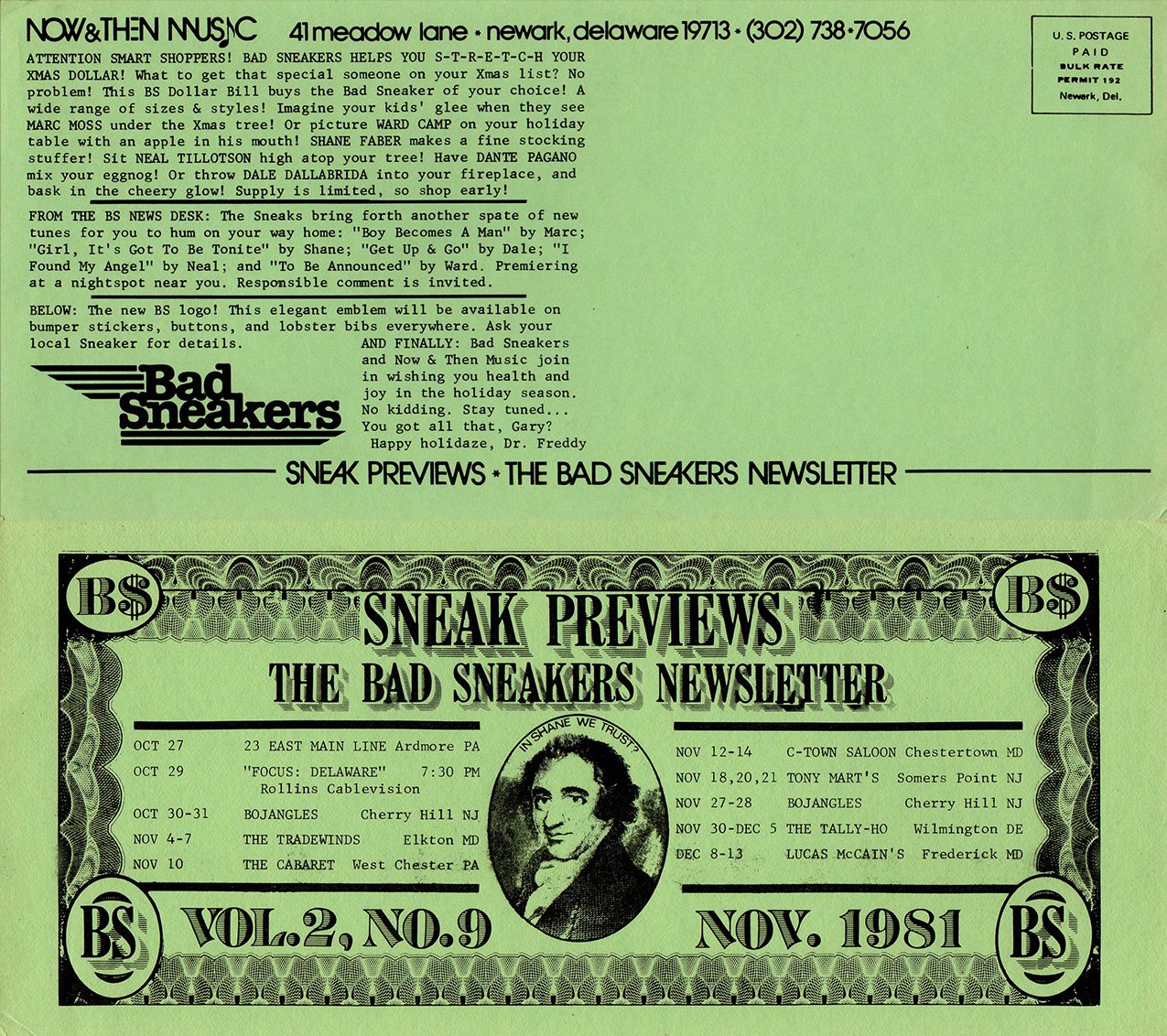 » Big Red, a 1972 GMC truck with years of faithful service to Bad Sneakers and the Larry Tucker Band, was totally wasted in a highway accident en route to Frederick, Md. Read more

» Audio technician Dante Pagano (not his real name) leaves to seek fulfillment as a musician. He is succeeded by Greg Mack of Eighth Day, who becomes the funniest guy in the band.

» The Bad Sneakers newsletter gives a nod to the Reagan recession. 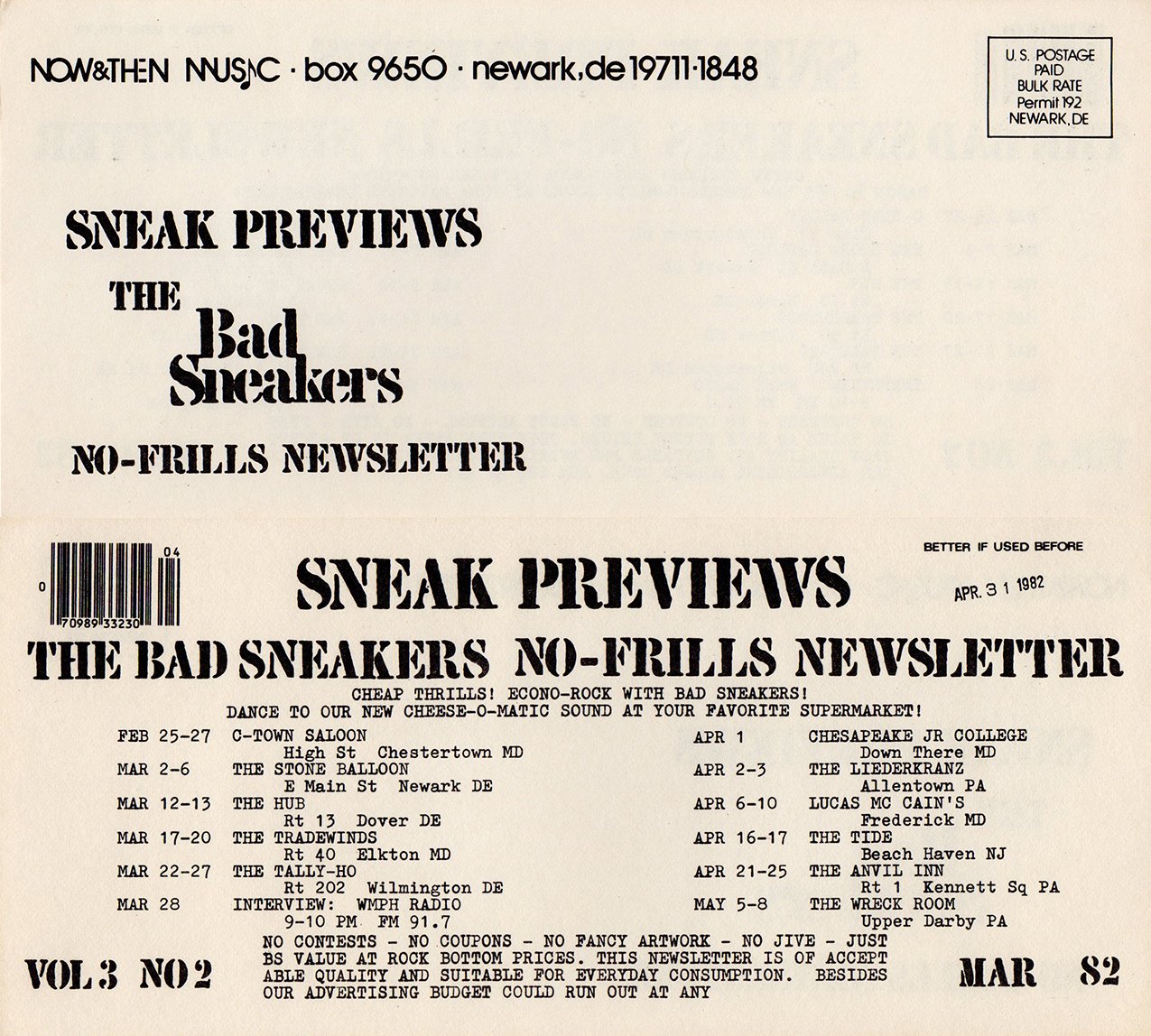 » Radio interview with WMPH-FM, Wilmington.
Host: “What do you guys do to relax?”
Shane: “I go to my girlfriend’s house.”
Marc: “Hey, that’s the same thing I do. … Funny I don’t run into you there.”

» The cover of The Paper Magazine: “We tend to make music that sounds the way a stainless steel kitchen looks,” Dale tells The Paper Magazine, which serves 100,000 readers in Delaware, Maryland, Pennsylvania and New Jersey. Read more

» “Congratulations Bad Sneakers, your talents are the dreams of many,” says a mind-boggling cover story in the Worton, Md.-based fanzine “The Staged Musicians Review.”
We are not making this up. Read more

» “Bad Sneakers is rolling,” writes News Journal columnist Charlie Walker. “The promotional wizards behind Bad Sneakers, a local band on the run to stardom, have come up with a stroke of genius. Copies of the band’s album ‘Sneak Attack’ are being distributed to roller-skating rinks, according to band member Dale Dallabrida. The album has been faring well at record stores, and this is just another advance in a many-pronged attack.

“Dallabrida says the album is being played at rinks in Christiana, Del., in Elkton, Md., and downstate Delaware. ‘The idea is threefold. One is to get our record out to people who don’t get out to see the band – maybe they’re too young. The second is a marketing strategy, to see reaction from DJs. And thirdly … we happen to think our record is great skating music,’ Dallabrida says.”

» Ward leaves the band to set up his own recording and producing business in St. Georges, Del. His move triggers a tectonic shift midway through the band’s career. Rather than enlist a new keyboard player, the band has its bassist and both guitarists double on synthesizers. The investment in technology signals a radical new direction for Bad Sneakers’ songwriting, production and image.

» National TV exposure: Several songs videotaped June 5 at Wilmington’s Outdoor Cabaret appear on the USA Network’s “Hot Spots” program. The band says it will revamp its act to focus on electronica: “The guitar is an instrument of the past,” Shane says in an interview between songs.

» “Bad Sneakers steps into the future with a new approach to dance-rock performance!” gushes a Now & Then Music press release. “The band has trimmed down to four members, each musician doubling on synthesizers to give the Bad Sneakers sound state-of-the-art versatility. Traditional mikes on stands have been replaced by tiny head-worn microphones.

Neal gets a set of Simmons electronic drums, and the other members get headless Steinberger-type guitars. Unmistakably ’80s, indeed. The Bad Sneakers Operations Manual attempts to explain. Read more

» Cutter Mohawk: Bad Sneakers videotapes a live outdoor concert at the Cutter Mohawk, an historic U.S. Navy ship anchored on Wilmington’s waterfront. Local bands Risque and Crazy Dog also appear. In a horrible twist of fate, the video recording deck remains on “pause” for most of the band’s performance.

» Makin’ tracks! “Bad Sneakers returns to the studio this month to continue work on their second album,” the band newsletter says. “Basic tracks are being recorded at Now & Then Studios in Newark, under the direction of producer Ward Camp. The LP will be released on the Now & Then label early next year, reflecting the new sound of Bad Sneakers: lean, streamlined state-of-the-art music for head and feet. Songs under consideration include ‘Anesthesia,’ ‘Down To It,’ ‘Man Overboard,’ ‘Ground Zero,’ ‘Paper Doll’ and other favorites from the Bad Sneakers repertoire. Wilmington News-Journal staff writer Al Mascitti will be present at various stages of the album-making process to take notes for a projected feature article.”

» The next Bad Sneakers album will be titled “Beat the Meter,” the winning entry in the band’s fan contest. Runners-up: “Son of Sneak Attack,” “Footprints of Your Mind,” “Traction,” “Where’s the Beat?” and “Big Ducks in the Basement.”

In an eerily familiar twist of fate, the cable carrying audio from the stage to the control booth – known as the “snake” – fails, rendering the band’s performance unlistenable.

Onlookers, however, blame all those new-fangled synthesizers, electronic drums, headset microphones and funny little guitars for making the sound system blow up.

» “Beat the Meter” previewed on Wilmington FM powerhouse WSTW. Host Bob Bowersox plays both sides in full and chats with the band.

» “Beat the Meter” released on Now & Then Records and distributed to more than 400 alternative radio stations in conjunction with trade publication College Music Journal.

“From the frantic crunch of ‘Anesthesia’ to the silky balladry of ‘All I Want to Know,’ Bad Sneakers displays an impressive new depth of songwriting talent,” one writer says. Well, the writer of a Bad Sneakers press release.

» What sort of music do the Sneaks play? “It’s hard to label,” bassist Dale Dallabrida tells the Delaware State News. “Let’s just say it has digital texture and audio wizardry, and that it’s sleek contemporary dance rock.” Read more, if you dare.

“They top all this off with a great live performance of ‘Anesthesia’ and the a capella ‘Invisible Man II,’ making this record a complete package.”

» “Bad Sneakers, a fantastic band that is quickly on the way up, is offering any radio station a copy of their second album ‘Beat The Meter.’ Airplay in the East is very heavy, phones are great, and I personally can say I’m impressed with their sound! Great album!” says Rick Kimball, assistant program manager at radio station WDOV in Dover, Del.

Buffalo, N.Y.-based music industry newsletter Behind the Scenes reports that WDOV has added “Blue Light” to its playlist along with Cyndi Lauper’s “All Through the Night” and Lionel Richie’s “Penny Lover.” WDOV joins a dozen regional stations adding tracks from “Beat the Meter.”

» Town council members in Smyrna, Del., turn down Bad Sneakers’ offer to perform a free concert in the town park. Councilman James S. Mood notes that the only thing he ever got for free was advice, “and sometimes that was bad.”

The band issues a snooty press release in response. You try to do something nice for Smyrna, and this is what you get. Read more

» Brush with greatness: Columbia recording artists Scandal (“Goodbye to You,” “The Warrior”) hobnob with members of Bad Sneakers after the Sneaks’ show at Kenny’s Castaways in the heart of Manhattan’ s Greenwich Village. From left: Marc Moss, Scandal’s Patty Smyth, Neal and Keith Mack of Scandal.

» News Journal columnist Al Mascitti on “Beat the Meter”: “I think it’s sort of a cross between ‘Thriller’ and ‘The Dark Side of the Moon” and better than both – an opinion that has absolutely nothing to do with the fact that I co-wrote two of the songs.” Read more

» New York-based Cashbox magazine names “Beat the Meter” a Feature Pick: “Pop melody and vocal harmony-conscious dance rock shade this second LP from Delaware’s Bad Sneakers. Each of the band’s members sings lead and is well-versed on the synthesizer. Strong material with an abundance of hooks.”

» Bad Sneakers appears on Dancin’ on Air on WPHL-TV (17) in Philadelphia. “You’re a talented bunch of guys with a great future ahead of you,” producer Michael Nise says.

» Rock the vote, again: The League of Women Voters of Greater Wilmington joins rock band Bad Sneakers to encourage citizens to register and vote. League members will be on hand in Rodney Square to provide information about upcoming elections. Bad Sneakers performs from noon to 1:30 p.m. See, Smyrna?

» The Bad Sneakers Annual Review is published annually by Now & Then Music, Box 9650, Newark DE 19711. Unauthorized duplication is a violation of applicable state and federal laws and will be swiftly avenged by the mighty sword of Zandor the Giant Slime Chipmunk. Read more

» Fan mail: The good, the bad and the weird. Read more

» Bad Sneakers’ namesake bowling team, sponsored by the band, gains top spot in state tourney action. “It’s the mid-point of the 18th Delaware State Bowling Association Tournament,” the News Journal reports. “Bad Sneakers holds down No. 1 in Class A team with pinfall of 3,237. Skip Saienni rolled a 695 series, when the other Bad Sneakers, Eugene Saienni, Ken Hofstetter, Jesse Edwards and Henry Davis Jr. joined in for a 1,073 scratch game.”

» “Caught in the Act” video shot in New York. Directed by Howard Zeidman of TV soap opera “One Life to Live,” the video stars Sean “Hollywood” Hamilton as the guy who gets caught. “Billboard” magazine runs a photo of the shoot. Read more

With Zeidman bankrolling the project, Bad Sneakers yields all creative control. The band is horrified at the result. Watch

» Dale leaves the band while recording is under way on the band’s third album. Charlie Hill joins as bassist. Read more

» “Big Ducks in the Basement” is released.

» Shane reports on his first year of life after BS as president of Tritone Productions. Read more

» “Invisible Man” added to playlist on WRUW-FM (“More music, fewer hits”), Cleveland, serving northeast Ohio from the Pennsylvania border to Toledo as well as parts of Michigan and Canada.

» “Beat the Meter” remains in the library of KUOI-FM (“Witness the strength of street knowledge”), Moscow, Idaho.

» Dale dies: Dale Anthony Dallabrida, an exceptional writer, editor and musician, died Aug. 5 at his home in Wilmington from a pulmonary embolism. He was 59.
Neal remembers Dale
Dale’s obituary